Corona crisis: Trainee home alone (and in the office)? 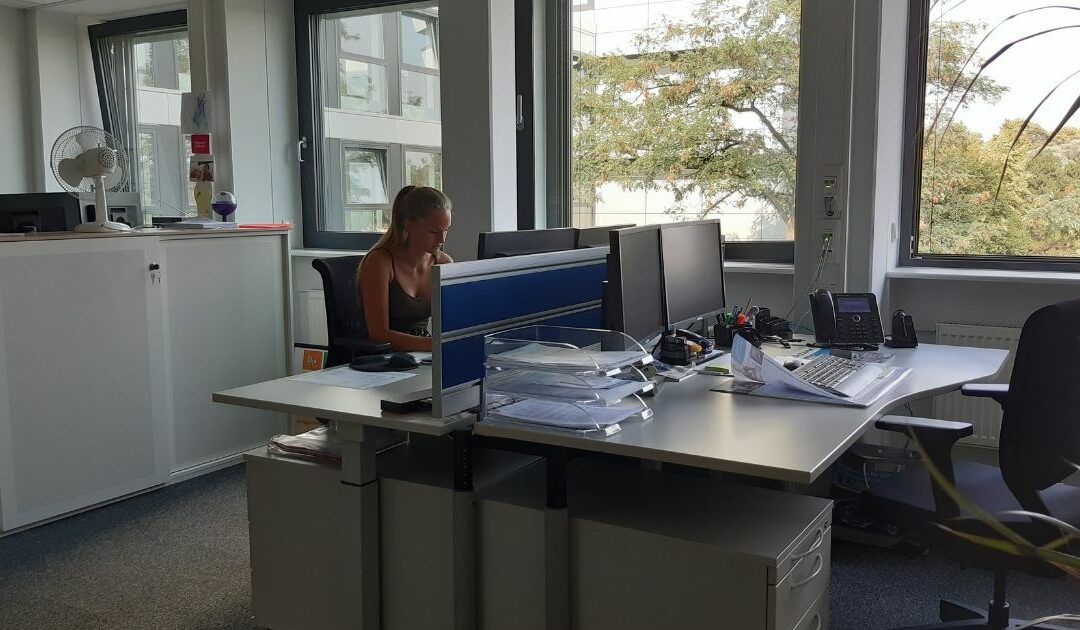 Hello dear readers. My name is Nataly Theile and I am doing an apprenticeship as an office management assistant at TÜV Rheinland. I started my second year of training in August. Just before I changed departments, the corona crisis came – and everything was different.

Shift work and home office is the order of the day

The Corona virus forced all companies to act. TÜV Rheinland also had to take measures to protect its employees as best as possible. Short-time work and home offices were the solution in many departments. As a trainee, I am excluded from short-time work and thus continued to receive my full salary. However, a lot has changed in my department at TÜV Rheinland Schaden- und Wertgutachten GmbH (TSW) (Damage and value appraisals).

I usually sit in an office with five colleagues. But now no more than three people are allowed to be there. At least one person had to be on site. So the work that needs to be done in the office could be passed on to the team members at home. So we made a plan that everyone would be in the office at least once a week and not too many people were there at the same time. That way, we didn’t have to wear a mask at work. As an apprentice, I was also allowed to work from home for two days a week. The other three days I was at the company. They made sure that I was never completely alone in the office and always had a contact person. If I was at home and had a question, I could always reach my colleagues by phone.

Keeping in touch via video chat

In order to exchange information and keep up to date, we have arranged a meeting once a week via Skype with everyone from the department. If anyone had problems or new ideas, they were discussed there. If there were things that affected a lot of employees, a livestream was usually started where questions could be clarified in the chat. We also had access to online training and the opportunity to share your screen with people in a Skype meeting.

As apprentices, we have also introduced Skype meetings to talk to each other about our schoolwork and simply stay in touch. Our training manager was often on call to see how we were doing and whether we were getting along in the training. We usually attend vocational school two days a week. Since it had to close for a while, like all other schools, we received the assignments by e-mail from the teachers.

Working on site under corona conditions

The work from home was really relaxed. I was in my usual environment and was able to save myself the time that I would otherwise need to travel to work. It’s a good 30 minutes by car and almost an hour by public transport. At home I was able to concentrate much better because I was not constantly distracted by small things that have to be done on the side. The day simply went by much easier. It was also nice to have a little change.

Nevertheless, it was a very strange feeling to see this huge campus at the Cologne location so empty and especially to experience the department so quiet. Sometimes I felt a bit lonely, but that made focusing a bit easier than usual. There were plenty of disinfectant dispensers everywhere – at the entrance of every building, in front of every elevator and on every staircase. There were posters everywhere with the Corona rules: keep enough distance and don’t shake hands with anyone.

Also the lunch break had changed quite a bit. Usually I spend it in the canteen to have a meal. But unfortunately that was closed for a while. After a few more employees came to the site, one of the two canteens was opened again. Of course in line with the Corona rules. Until one sat on his place, a mask had to be worn. Each building was prescribed its own meal time so that never too many people were there at the same time. Cutlery was now handed out by the canteen staff and the buffet areas were closed. Drinks were also only available in packaged bottles. The routes were laid down, so that no one could cross each other’s path. But everybody quickly got used to these measures, as it is the same in the supermarket, restaurant or other places.

Virtual hugs from the team

Due to the short-time work I even had more to do than usual. My job was to record the hours worked by our employees. Because of the short-time work a new time recording system had to be installed. I helped create it and explained the system to our employees. This also included recording and correcting their working hours. My most used means of communication here was definitely the phone. It was nice to know that my help was needed and that I could support my team.

As my change of department to TÜV Rheinland Inter Traffic GmbH (TRIT) was imminent, I deliberately chose a day when most people were in the department so that I could say goodbye with a cake despite everything. Of course it was a great pity that I couldn’t say goodbye to everyone properly, but you have to make the best of it. In an e-mail I thanked everyone for the good time and wished my team mates all the best, and many lovely mails came back. This is the way to communicate at the moment, at least until the risk of infection is not so high anymore. In the new department I get to know new faces every day, because even here working from home is partly the order of the day and the offices may not be fully occupied yet.

Coming out of the crisis stronger together

I think we have mastered the Corona crisis very well so far and have learned a lot from it. Thanks to the Internet, it wasn’t difficult to keep in touch with colleagues or other trainees and to continue working from home. On the contrary – it saved me time and allowed me to focus more on what was going on. This simply shows how important cooperation is, especially at such a special time, and how well it works, even when not everyone is on site. Both the company and the employees have proven that we are capable of restructuring quickly and effectively.

Nataly Theiles’ job is to complete an apprenticeship as an office management assistant and to take as much knowledge as possible with her in the various departments. Her career tip for you is: “Be open to new things and take on challenges.